Yeah, so these exist.

About three years ago I was wandering through Luzon – a large island in The Philippines, home to Manilla, Spam restaurants (the meat, not the amazing wealth of internet ads that both titilate and confound me when they show up in my inbox) (darn those crafty internet marketers, I didn’t even know I knew the Emperor of Equador), and more people than Carter has liver pills. If you don’t understand that last comparison, ask your Grandma, she’ll explain it to you.

Anyway, Spam is incredibly popular in the Philippines. This restaurant was in a mall:

We were traipsing through the Filipino countryside, on our way to Batangas – a beautiful beach resort on the Southwest coast of Luzon (see here). We came upon a little market that sold the freshest Mango, the sweetest pineapple, and the tiniest bananas that I have ever seen.

Among the fruit and other Filipino goods was a true treasure. Behold!

But not all of us can go to Manilla. Thankfully, Herr’s has come to the rescue with their Kansas City Prime Steak Potato Chips. Many of you may not have heard of Herr’s Snacks. I had not. I soon found out (via Wikipedia and Google) that they are a company based out of Nottingham, Pennsylvania (why do so many yummy things come from Pennsylvania?) (sounds like the perfect topic for a future blog). Herr’s is known for its unusual varieties of potato chips including: Horseradish, Old Bay Seasoning, and Baby Back Ribs.

Now these aren’t the strangest flavors of chips. I can think of ones that would be a lot more exotic; ones that should not exist. I mean think of a chip with the delicious flavor of hot dog.

Oh, wait. Herr’s has that covered.

What about Lamb and Mint? 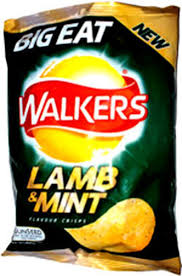 Anyhow, I don’t have those last three chips to review for you, but I did see these things at my local Kroger, and knew I had to have them. I bought them and brought them home, ready for a beef-filled treat, and ready to report back to you everything I tasted, smelled, felt, and experienced.

The first thing that you notice is that these things are not made with real beef.

What the what? This doesn’t have real beef in it? I know it is kind of silly, but I was a bit disappointed. The last thing that I want is artificially flavored Kansas Prime Steak processed potatoes. I mean, come on! If you are going to the trouble to assign such a specific name to it, you’d better have some honest-to-goodness Kansas City Prime Beef dust or pieces or chunks or something in the mix.

If it doesn’t have beef, then what exactly is in this stuff? I flipped the package over to read the other side.

While searching for the ingredients, I saw this:

Well that sounds promising, doesn’t it? I mean, really, if a $3.00 bag of chips can quench my $20.00 craving for Outback Steakhouse or my $80.00 craving for Ruth’s Criss, then color me excited! I would be willing to make the trade and save a little green. Sounds like a good trade-off.

A little lower was the list of ingredients which instantly reminded me of this Animaniacs song:

Well, at least the first thing on the list is “choice” potatoes. I am highly convinced that most chips are made out of drywall mixed with “potato flavoring” and fully expected these to be no different. I was pleasantly surprised to see choice potatoes, I am just not sure who chose them. That’s a question I would like answered along with my most vexing wonderings such as: where is Hoffa, what happened to Amelia Earhart, who invented evil, were platypuses jokes, and do dogs sniff in colors. We may never know the answers to these and other questions, but we do know that we could write to Herr Foods Inc. at their P.O. box if we were not so lazy. I guess we’ll just have to live with unanswered questions.

Among the zany plethora of ingredients, I see my good old friends MSG and Disodium Guanylate. Mmmmm. This means that eating these chips could lead to sweating, swelling, numbness, flushed skin, headaches, heart palpitations, chest pain, incontinence, erectile dysfunction, Herpes Symplex IV, and sudden death. But, in the interest of journalistic integrity, I decided to risk it all to bring you, faithful Reader, a review of these delectable delicacies.

The first thing you notice when you pull open the crisp foil packaging is the smell. It is sharp, immediate, and beefy – kind of like sticking your nose into a jar of Wyler’s beef bouillon cubes, and sniffing hard.

Not unpleasant, but a bit strong for my taste. It sure smelled like natural beef flavoring was used.

The chips, themselves, were a lot like Lay’s Wavy Chips, as far as size and appearance is concerned.

They had about the same shape of ridges, thickness of chip and texture to them. They were also quite greasy, and that beef flavor really stuck to your fingers. For the rest of the afternoon, every time I would pick my nose, I would think, “Mmmm. Beef.” They had just the right amount of potato chip-y crunch and the sound was so loud that my lazy ol’ mutt actually lifted his head from the cool linoleum and looked up at me expectantly, when I bit into the first one. I did not share.

or a handful. Anyway, I tasted them, and my mouth was flooded with the flavor of artificial beef, which was decidedly un-beefy. Instead, it tasted more like garlic and onion, with a hint of leather. It did not taste like Prime Steak, unless you have never tasted Prime Steak before. Then it might have tasted what Prime Steak might be imagined to taste like if all you have ever eaten is boiled beef tongue, because I swear, it the aftertaste tasted like it had a hint of beef tongue ground, powdered and sprinkled ontop of garlic flavored Potato chips. It wasn’t bad, it just was slightly off.

So I thought to myself, “Self, what this needs is some French Onion Dip!”

Luckily, I just happened to have some.

I don’t know either, but this turned out to be just what these things needed. As soon as I combined these two flavors, I knew I had just discovered what awesome tasted like. Lays have nothing on these babies. Not only could I not only eat one, I couldn’t stop until almost half the bag was gone. These things were freakin’ tasty!

I dipped and dipped and didn’t stop until I felt MSG coursing through my veins, began to sweat, had a seizure, and don’t even get me started on the ED. But it was worth it. Sooo worth it. These are delicious, and if I close my eyes, turn on some ridiculous Asian pop, sniff some fish sauce, speak a bit of Tagalog, turn the heat up to 95 in my house, and the humidifier up to 100, I can almost pretend I am back in that little Filipino market near Batangas.

So, if you are ever in your nearest Kroger and you see these, don’t hesitate to buy a bag along with some flavorful Kroger French Onion Dip. It’ll be like your own party. Better yet, invite me. I always like a party.

P.S. – is it just me, or with the sunglasses on, do I look remarkably like George Bluth’s Surrogate?