I am an unapologetic movie geek. Ever since I was two, I have loved the movies. One of my earliest memories is seeing  Star Wars in the theater, with my dad, in 1977. Since then, I have found solace, wonder, and magic on the silver screen. I remember the first time I saw Raiders, the first movie I ever went to by myself (Back to the  Future), the first “R” rated movie I ever went to legally (Predator), and the first time I saw Disney’s Peter Pan. Movies have touched my heart, effected my worldview, given me hope that the geek could get the girl, and challenged my thoughts and beliefs. I have strived to be part of the process since I was a kid. I have worked hard, trying to be a part of the biz.

When I was a teenager I would watch at least one movie a day, tearing through everything from Casablanca to The Garbage Pail Kids. Later on, when I worked for a movie theater, I sometimes would go to two or three movies on a lazy Saturday. Some of my best jokes have been directly plagiarized from movies. I have bought movie props, relished movie trivia, and read books on the masters and their craft.

Whenever I get a chance to visit a shootingllocation, I jump at it. There is a strange, almost mystical connection to a film when you stand in the place where it was shot. It changes the attachment to the movie. Plus it is just cool – from a historical perspective.

Recently, I was in Georgetown, at this intersection: END_OF_DOCUMENT_TOKEN_TO_BE_REPLACED

My favorite all time holiday is Halloween, and I have always wanted a Michael Myers mask. Unfortunately, most of the commercial masks look something like this: 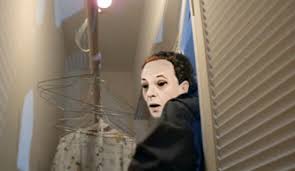 END_OF_DOCUMENT_TOKEN_TO_BE_REPLACED

Things have been insane. So you’ll just have to wait for part two of my Temple of Doom Retrospective. Sorry.

In the meantime, though, enjoy a little taste of Thriller. This was the first album I ever bought, and it was Vinyl. In fact, I still have it. I’ll never forget going over to K-Mart and purchasing it with left-over potholder money.

Anyway, it was cool then, and it is flippin’ sweet, now.

A bit of trivia for you:

This was a landmark video and had a brief theatrical run in order to qualify for an Academy Award.